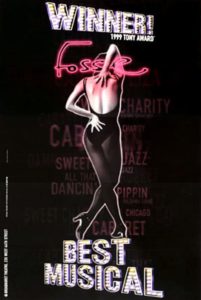 The original Broadway poster shows you everything you need to know

We’re back, Jazz Hams, with our final Fossepocalypse – the bonus round viewing of the Broadway revue FOSSE!

This 1999 revue won the Tony for Best Musical that year. Originally conceived by Chet Walker (a regular dance captain for Fosse), the show toured out of town through most of 1998. The full credits are: “The musical was directed by Richard Maltby, Jr. and Ann Reinking, with original choreography by Bob Fosse. The co-choreographer was Ann Reinking, with choreography re-creations by Chet Walker and dance reconstructions by Lainie Sakakura and Brad Musgrove with Gwen Verdon as artistic advisor.”

This production was filmed as part of PBS Great Performances in 2002 with Ann and Ben Vereen stepping into a few numbers to add sexy star appeal.  (Sadly, Ben doesn’t move the way he used to, but he’s still got all that charisma!)

If you’re a fan of Fosse, seek out this DVD to see little-known pieces (like the “Cool Hand Luke” trio) beautifully recreated. It’s also a chance to see familiar pieces in a new light (or see parts you’ve never seen before because of Fosse’s editing style!).

There is no IMDB entry for this one, folks.