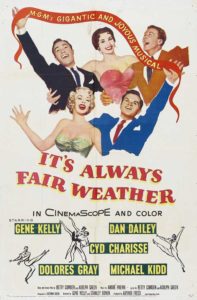 This week is unusual in that none of your hosts have seen our movie – IT’S ALWAYS FAIR WEATHER!

Known today as the movie that “the Gene Kelly tapping on roller skates” dance is from, 1955’s IT’S ALWAYS FAIR WEATHER pretty much marks the end of the Golden Age of big movie musicals.  Coming from the famed Freed Unit, with Stanley Donen directing and Comden & Green writing, this movie was expected to be a huge hit, especially since it was conceptually a sequel to the fantastic ON THE TOWN.

Instead, it suffers from it’s own cinematic mid-life crisis, with the storyline focusing on three friends reuniting in middle age only to discover that none of them are particularly happy with where their lives have led them – and a film that doesn’t know how to turn that conceit into an entertainment.

This one’s a bit of a deep cut, and we’ll be honest that the film doesn’t really work.  But it’s still worth watching for the snappy writing given to the ladies (Cyd & Dolores), and the terrific dance sequences (staged by Michael Kidd, who also acted in this one – one of his few onscreen roles).

Take a peek and take a listen! 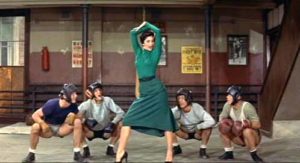 Cyd with her magical legs in the magic skirt.

Tapping with trash can lids?! (“The Binge”)

Dolores has her own flippy boys!