So adorable you might even forgive the White Slavery plot.

For this week’s episode, Windy bends Mike and Vinnie’s brains with THOROUGHLY MODERN MILLIE.  An all-star cast made this movie a hit at the time, but it has since vanished into cinema obscurity – resurfacing as a hit Broadway musical in 2000!

Starring the inimitable Dame Julie Andrews, along with Mary Tyler Moore, and Carol Channing, this movie has pedigree to spare (check out the director’s other credits, for a start). Julie gets a chance to truly strut her comedic inclinations, with everybody else in the cast joining in the silliness 1000%. There’s a lot of high energy zaniness, which is necessary to distract from the really problematic racial stereotypes and white slavery plot elements.  Yes.  You read that right. 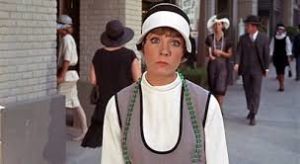 Seriously? Who thought THAT was a good idea?

Still, the comedic bones were strong enough to support a Tony-award-winning stage musical, which launched the career of Sutton Foster.

It’s not banana oil to say there’s a lot of entertainment to be found in this forgotten gem. Take a listen to our episode, and then take a look for yourself!

“Just load those uncomfortable racial stereotypes into the back of the truck.”