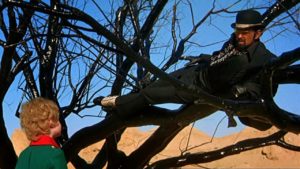 Small children should definitely trust me. Just like Michael Jackson.

Welcome, listeners, to part two of our discussion of Fosse’s last dance performance on film, THE LITTLE PRINCE.

In this week’s episode, we delve into Fosse’s role and performance. Stanley Donen offered Fosse complete creative control to entice him to do the film (and it’s a testament to Donen’s sure hand at the helm that Fosse’s piece isn’t glaringly different). Fosse’s performance is the only record of Fosse doing Fosse – this is Fosse choreography at its most iconic, performed by the man himself.

Also included in this week’s episode is discussion (rampant squeeing) of Gene Wilder’s performance as the Fox. Gene is perfectly cast as the twitchy, exuberant, sensitive fox who teaches the Little Prince the most important lesson: it’s love that makes each of us unique and special.

A tender film overall, Fosse’s performance embodies his peculiarities and philosophy: in love with death, a consummate showman and huckster, but sincere and honest at heart.

Take a listen and be tamed!

What do you mean the Fossepocalypse is almost over??!