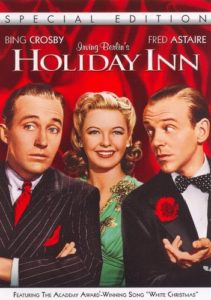 Is there a film genre for “problematic but charming”?

This week, Vinnie and Mike finally take in the seasonal classic HOLIDAY INN, starring Bing Crosby and Fred Astaire, with Windy as their native guide.

It’s a standard romantic comedy love triangle, except that one-third of the triangle is crooner extraordinaire Bing, and another third is one of the best dancers of his (or any) era.

The plot serves mainly as a vehicle to get from one Irving Berlin song to the next, but along the way you get gowns by Edith Head, and snappy banter courtesy of Claude Binyon.

You also get one of the most infamous blackface numbers still remembered today, as well as troubling gender politics, and even a bit of jingoistic war propaganda.  Because that’s what the holidays are all about! 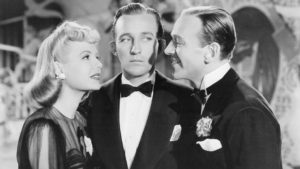