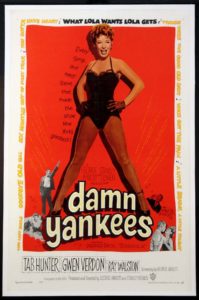 Jazz Hams! This week’s episode is the exact same production team delivering the goods – yet again – in DAMN YANKEES. This time with a heaping helping of Gwen Verdon!

(SIDENOTE: Mike’s mic has a weird echo and we do apologize for the odd audio – it eventually corrects.)

Jack Warner made a two-picture deal with George Abbott to bring THE PAJAMA GAME and DAMN YANKEES to the screen faithfully from Broadway (with the help of the inimitable Stanley Donen of the Freed Unit). And god bless him, because this is the only film performance we have of Gwen Verdon at the height of her substantial powers.

Neither Mike nor Vinnie had seen this before, so this was a revelation to both, and a good compare/contrast to THE PAJAMA GAME.

With such classics as “Heart,” “Shoeless Joe from Hannibal Mo,” and (of course) “Whatever Lola Wants,” DAMN YANKEES won’t bring the pain – we promise! 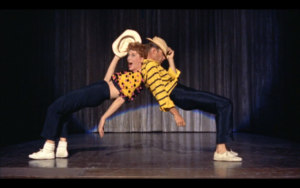 I’ve got a pain just looking at that move. Also – Verdon & Fosse together!