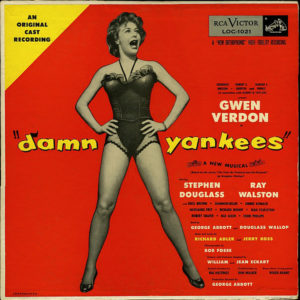 She gets hotter everytime I look at her

Fine folk of Jazzhandia, this week we wrap up DAMN YANKEES with part two of our episode. Part two is pretty much all Gwen-love.

Gwen was Jack Cole’s star dancer who – like Fosse – gave up on being a movie star and headed to Broadway where she made a big splash almost instantly.

DAMN YANKEES was her first starring role, and it’s a doozy! Lola is arguably the best character in the show, played with heart and depth by our favorite sassy redhead.

This movie would be Gwen’s only major film role, and the only time she and Fosse would dance together on film.

Who’s Got the Pain?