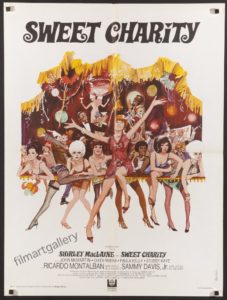 Listeners, this week is a real treat – Vinnie and Mike watch Fosse’s film directing debut SWEET CHARITY for the first time ever!

This musical was Gwen Verdon’s combined “come back” and “swan song” – she had taken time off to have a child with Bob and be a mother, and at 41 wanted one last big starring vehicle on Broadway, before she got too old (crazily enough, this was NOT her last big starring Broadway vehicle. That would come nine years later with CHICAGO). By the time the studios wanted a film version – three years later in 1969 – Gwen was too old for a film version of the role and instead generously coached Shirley MacLaine on the role.

Shirley MacLaine – discovered while understudying for Carol Haney in PAJAMA GAME – was a huge star by the point, and used her influence to get Fosse his first gig helming a movie.  Cinematographer Robert Surtees found himself with a director eager to learn and willing to try anything and everything, and the result is Fosse all over.

So, spend a little time with us as we gush about SWEET CHARITY!