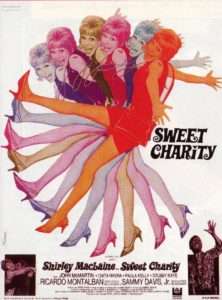 Boy, those practically-prostitutes sure are wholesome and kooky!

Jazz hams, we continue our deep dive into the decadent depravity of Fosse with part two of our discussion of SWEET CHARITY.

While this was Fosse’s film directing debut, he was unafraid to experiment and found a willing accomplice in his cinematographer, Robert Surtees. The two of them created a visually striking film that critics adored – and audiences hated.

Gwen Verdon was on set assisting with choreography and coaching Shirley MacLaine in the role – a generous and classy move since Charity was created for Gwen by Bob. Watching Shirley in the role, you can almost see Gwen overlaid in the performance, particularly the dancing.

Shirley performing “I’m a Brass Band” in the movie

If you still haven’t watched SWEET CHARITY, you’ve never seen Shirley MacLaine dancing Bob Fosse and that means you’re missing out. There ain’t nothing better than this – so check it out!