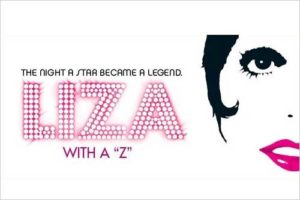 The Fossepocalypse is lingering at the apex of Fosse’s GOT year (Grammy-Oscar-Tony) as Windy shows Mike and Vinnie the television special LIZA WITH A Z.

After SWEET CHARITY flopped, Fosse feared he would never work again and started lining up projects as fast as he could get someone to say “yes” – each one the back-up plan to the other. He got the idea for a one-night-only television special watching Liza rehearse all-out during the filming of CABARET and wanted to capture the transient excitement and energy of performing.

Liza had been performing cabarets and concerts for years, and many of the songs here were staples of her repertoire that Kander & Ebb had written especially for her.  Fosse added back-up dancers and his signature choreography, as well as his directorial vision lending an almost documentary feel.

If you’ve never seen Liza at the height of her powers, or (like Windy) have seen her in movies but never in a live concert setting – you’ve never really understood the power of Ms. Minelli.

Take a listen and Ring Them Bells with us!

P.S. Keep your eyes peeled to spot Ann Reinking as a back-up dancer!