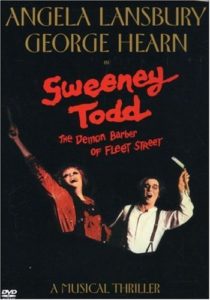 If the only version of SWEENEY TODD you’ve ever seen is the Tim Burton one, then Windy has some strong opinions on what you should be watching first chance you get. (Which is literally how this episode happened to Mike and Vinnie.)

Arguably Sondheim’s masterpiece, the 1979 Broadway sensation was recorded on tour in Los Angeles in 1982 with Angela Lansbury recreating her iconic performance as Mrs. Lovett and George Hearn ably stepping into Len Cariou’s shoes as Sweeney. The show was the pinnacle of the Stephen Sondheim (lyricist/composer)-Hal Prince (director/producer) partnership that would be shattered by the failure of their next show (MERRILY WE ROLL ALONG). Dark,  disturbing, and deliciously wicked, it’s Sondheim’s ode to the Victorian penny dreadfuls.

Attend our tale as Windy rants about why musicals should cast trained singers, Mike gushes over Angela Lansbury, and Vinnie retroactively hates the Burton movie even more. We want you, bleeders!