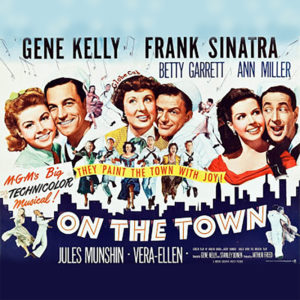 More wholesome than three sailors on shore leave really should be.

This week is our first episode featuring Gene Kelly as he sails through Manhattan in ON THE TOWN! Neither Vinnie nor Mike had ever seen it, and this is a classic for a reason.

Based on a ballet created by Jerome Robbins (THE KING & I), and made by the Freed Unit (known for kicking ass in all things musical), it features a delightful cast, TWO ballet segments by Mr. Kelly, and plenty of comedy.

This is a key movie in your six degrees of separation strategy, with Frank Sinatra, Ann Miller, and Vera-Ellen. Also featuring a performance by Carol Haney in the “A Day in New York” ballet, who was assistant and muse to THREE of modern American dance’s greatest choreographers.

Join us as we go On The Town! 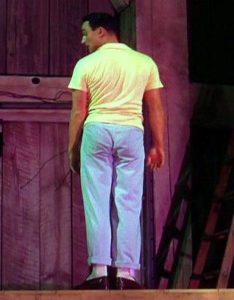